Even without Sam Allardyce being officially sacked by Everton, the club’s end of season had been promising quite a saga for a new manager.

The Toffees have been linked to several bosses in the past week, with some recent strong claims saying talks with Marco Silva are underway.

On Tuesday morning, The Mirror put out a story saying things could get more complicated for Everton, since there’s another club in the race for Silva.

That would be Benfica, who would be offering the former Watford manager a job, as they expect their current boss Rui Vitória to go in the summer.

However, on this very same morning, what the Lisbon newspapers are saying is completely the opposite: Benfica have no intention to sign another manager this summer. 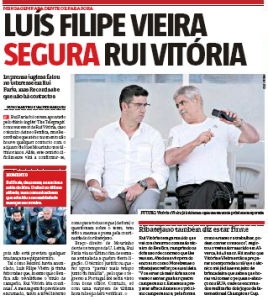 Outlets Record and A Bola both spoke to club sources, and the answer was the same. President Luis Filipe Vieira has no plans to sack Rui Vitória, and should keep him in the job for at least one more season.

Although the Premier League is a dream job for any manager this days, an offer from Benfica with the chance to win titles in his home country would certainly attract Silva as well. So leaving the Eagles out of the race certainly makes things better for Everton.