Andreas Pereira realised it was going to be difficult for him to have more prominence at Manchester United this season, which is why he joined Lazio on a loan deal last summer.

The 25-year-old has struggled to have more game time in Rome and has managed only two starts in 16 appearances in all competitions.

In the last seven league matches, the midfielder has collected only 75 minutes of action on the pitch.

A lack of regular opportunities at the Italian club has seen reports suggest there’s a possibility the player’s loan deal could be cut short in the winter market. However, this rumour has been dismissed by a member of his entourage, Matheus Diniz.

“He is happy in Rome,” Dinz said during an interview with Het Belang van Limburg.

Dinz further went on to add: “Andreas likes the Italian culture, which is closer to the Brazilian than the English. He feels good in Rome. Lives there with his wife and daughter. The supporters like him, only he wants to play more.

“Until now he has mainly been a substitute, but he always does well. He started in the playing XI against Torino and scored immediately.”

As part of the agreement between Manchester United and Simone Inzaghi’s side, Lazio retain an option to make the Belgium-born Brazil international’s transfer permanent in the summer.

Dinz is of the belief both the Serie A side and Pereira want to continue their association after this season. 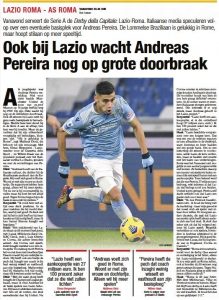 “I don’t do Pereira’s transfer business – I do marketing – but my feeling is that both club and player want to get on with each other,” he explained.

“There is another clause, which says that Lazio has a first option if another club makes a bid. So, I certainly don’t rule out that he will play for Lazio next season.

“Players may also leave, and Andreas is also very well integrated into the group. He is good friends with Lucas, whom he knew from England, Correa and Caicedo.”