Home Europe Despite development, player is ‘heading to England’ in January if Tottenham put...
SHARE

As you can see in every single Portuguese outlet today, Bruno Fernandes has officially signed a new deal with Sporting.

The Lions’ midfielder is getting a pay rise, although his release clause and the expiry date stay the same.

Now although the club are glad their biggest star has agreed a new deal, all reports about the contract also give Tottenham Hotspur a mention.

Most of them make it clear that a move still isn’t ruled out, and it’s newspaper Record who brings a few more details on the chase. 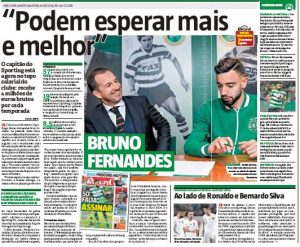 They say the new agreement doesn’t change a thing for the January window. It’s claimed that Tottenham had already been interested in the player, and the interest grew with José Mourinho’s arrival, especially because of his wish to strengthen the squad in the winter market.

In case Spurs offer €70m, Fernandes is ‘heading to England,’ even though Sporting’s board would like him to stay until the end of the season. Record says the Lions even have some targets in mind to replace him in case he goes in January.