Despite already having Lucas Torreira and Matteo Guendouzi to do some of the defensive gritty work in midfield, Arsenal are still looking for a player capable of sitting in front of the defence and protecting the back four.

A few names have been mentioned by the European press, but one that keeps popping up here and there is that of Thomas Partey, currently at Atlético Madrid.

The 26-year-old is more or less one of the first names on Diego Simeone’s team sheet these days, and yet there’s a belief he could leave this summer.

At least, that’s what Corriere dello Sport are claiming on Tuesday, reporting that Arsenal have ‘€50m on the table’ for the Ghana international, who is now ‘one step away’ from a move to the Emirates.

This all comes in an article regarding the bigger picture of summer moves, as Barcelona want Lautaro Martínez from Inter, but also require a new central midfielder, which is where Saúl comes in. 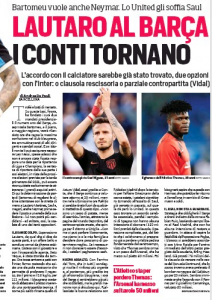 However, Corriere state that Atlético might be reluctant to sell the Spaniard as they are already ‘preparing to lose another key midfielder’ in Partey (which is where Arsenal come in).

We’re not entirely sure where this has all come from, but we thought we’d let you know it appears to come from an Italian newspaper, who may or may not have sources within the whole thing.

It’s hard to know, but they seem pretty adamant about the whole Thomas Partey becoming an Arsenal player soon thing.