Mauricio Pochettino is settling in as manager of PSG, and having to navigate his way around dramas off the pitch.

L’Equipe report that before taking on his first job since Tottenham Hotspur, the Argentine studied what had gone wrong for Thomas Tuchel during his time in charge of the Ligue 1 champions.

The German, now at Chelsea, had managed to annoy people around the club, not getting on with sports director Leonardo, sending snipes towards the medical team, and creating a difficult atmosphere which didn’t go down well with PSG’s Qatari owners.

L’Equipe say Pochettino’s time at Tottenham will have prepared him for this, specifically having to deal with Daniel Levy at Spurs. It’s stated that Levy ‘did not speak’ to recruiting chief Paul Mitchell, a difficult relationship which saw the latter eventually leave Tottenham. 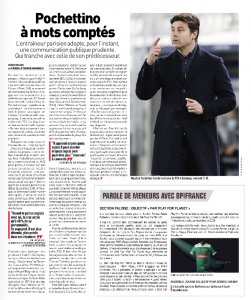 On top of that, Levy is said to have demanded Pochettino drop a translator during interviews, and speak English to the media whenever dealing with them.

Now, the manager has reverted to using a translator, wanting to be as guarded as possible as he works his way into the club and the power dynamics at play.

In that respect, for L’Equipe the experience at Tottenham has served Pochettino well.