One of the biggest promises coming out of English football at one point, Wilfried Zaha’s career stalled when he went to Manchester United.

His return to Crystal Palace proved fruitful, however, as the winger, now playing for Ivory Coast on an international level, has become a feared forward for defences in the Premier League.

It’s surprising he hasn’t made a move elsewhere since, but it seems there are some behind the scenes trying to get the 28-year-old a big transfer sooner rather than later, as, according to Gazzetta dello Sport on Thursday, ‘an operator proposed Zaha to Inter in the past few weeks’.

However, it’s made clear by the newspaper that Antonio Conte’s club ‘aren’t currently in a position’ to make such a move, as it would prove too costly, especially midway through the campaign. 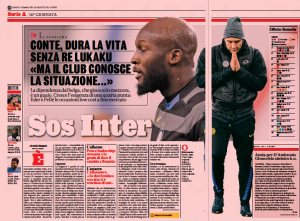 With a contract at Selhurst Park until 2023 and a contribution in 45% of Premier League goals for Crystal Palace so far this season, it’s clear the forward is hugely important to Roy Hodgson’s plans, meaning they won’t let him go on the cheap.

This summer might be different, as it would allow the Eagles more time to find a suitable replacement, if that’s even possible, but for now, and barring a massive offer, it seems Zaha is destined to finish the season in London.