Real Madrid allowed Borja Mayoral to join AS Roma on a two-year loan deal in 2019, but that didn’t stop Crystal Palace from coming forward to make an attempt to sign him in the summer.

The Eagles’ efforts weren’t successful because José Mourinho was not in favour of letting the striker leave in the last window.

Mayoral staying with the Serie A side has not been fruitful, since he has been restricted to only 27 minutes of action in the league this season.

Fiorentina have a plan to sign the 21-year-old in the winter market, but they must ‘beware’ of Patrick Vieira’s side.

The Premier League side wanting the Spaniard in January is backed up Mundo Deportivo journalist Pablo Planas.

He claims that due to the Real Madrid owned player’s lack of minutes at Roma, an ‘escape route has been opened’ and Mayoral is ‘ready to take it’. 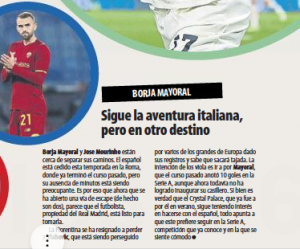 He is ‘close’ to partying ways with Mourinho and his side. To do that, Mayoral has two options; La Viola and Palace.

Planas states that Crystal Palace, who already made an attempt in the summer, ‘continue to be interested’ in Mayoral. However, ‘everything indicates’ he’s likelier to continue in Serie A, by moving to Fiorentina rather than joining the English club.