Wesley Hoedt left Southampton in January and made a switch to Celta Vigo on loan until the end of the season, the La Liga outfit have the option to make the transfer permanent in the summer.

The centre-back made 13 starts in the Premier League for the Saints, but after Ralph Hasenhüttl replaced Mark Hughes as manager at St Mary’s, he didn’t feature for the club.

Having been frozen out of the squad by Hasenhüttl, the Netherlands international decided he had to leave.

Hoedt has given an interview to Spanish newspaper La Voz de Galicia, and explained why he decided to join Celta Vigo in January.

“Overall, they showed a lot of interest in me. I was in a difficult situation in Southampton, I wasn’t playing anything, and what I knew about Celta appealed to me,” he said.

“Between the personal situation in which I was, the great interest that they transmitted to me and the history of the club, I decided to come, and I hope that things go well.”

The 24-year-old was further quizzed as to why was it difficult for him at Southampton after Hasenhüttl took charge. The defender said, “I really don’t know. 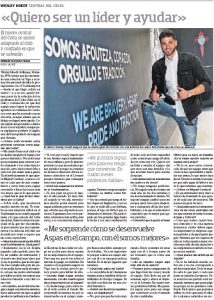 “It was complicated for me, but I couldn’t do anything about it, so I’m lucky I could find a solution by coming to a club like this.”

On his debut with Celta, Hoedt was sent off and after serving the one game suspension, he returned to the starting lineup for his side’s defeat to Getafe.