Arsenal and Manchester City continue to be involved in the race which is being formed for Benfica wonderkid João Felix. The youngster gets two big stories in the Portuguese papers today, and the Premier League sides get mentions in both.

One of them is on the front page of A Bola. They say that Arsenal, Manchester City, Milan, Borussia Mönchengladbach, Hamburg and Monaco are all in for the player.

Newspaper O Jogo has a different story, but with the same outcome. The outlet is covering the latest news from Italy, which has been claiming AC Milan have sent scouts to watch the midfielder.

So O Jogo couldn’t ignore their own news from this month, when they said that Arsenal and Manchester City also had emissaries keeping an eye on the youngster in a Benfica B match. 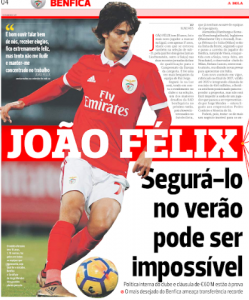 The newspapers claim that João Félix is considered to be one of the biggest talents in Benfica’s academy, and that’s why there’s no way he can get out of the club easily.

The teenager is already protected by a €60m release clause, making it highly unlikely that he will leave Lisbon before making his debut for the first team.

Even though A Bola claims that keeping him in the summer could be impossible, they are counting on a record transfer in case these clubs pay for his release clause, which is unlikely. 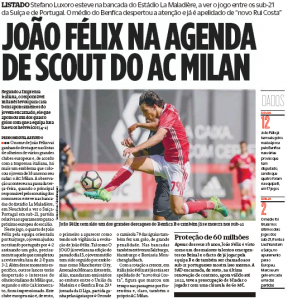 Although Arsenal have a huge scouting network and are often linked to most of the young Portuguese talents, it’s still interesting to see Manchester City involved in this one. Let’s see if their are in for real and will get in the battle for the youngster.