Fiorentina are holding talks with Arsenal in an attempt to lower the €15m purchase clause in Lucas Torreira’s loan deal.

That’s according to Corriere Dello Sport, who say there is a will from all involved to get a permanent deal over the line.

Torreira has been on loan with the Italian side since the summer when he was shipped out by Mikel Arteta, who didn’t want him in his squad this season.

He’s been a big hit back in Italy, establishing himself as a key player for Fiorentina, making himself a ‘hardly replaceable reference’ point in the team.

They’re determined to keep him, and the ‘Uruguayan seeks the definitive’ deal as well, but that will require some negotiations with Arsenal.

While Fiorentina have a purchase clause set at €15m, they would prefer to bring that down, and talks with Arsenal are ‘going hand in hand’.

The Italian side are ‘working on it’, and the idea of a permanent transfer is not quite the ‘simple matter’ that they would like it to be. 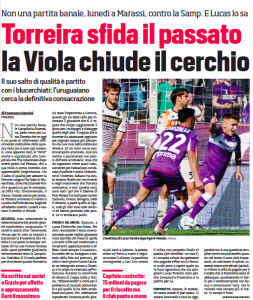 The whole process involves ‘high economic interests’, particularly as they are lining up a four year deal with bonuses for the Arsenal man, including various commissions as well.

That is why they are ‘trying to lower’ the purchase clause to save themselves some money, although whether the Gunners will allow it isn’t mentioned.

On the face of it, they have no reason to lower a figure set in the loan contract but would presumably prefer to get something than risk Fiorentina walking away entirely and leaving them with a player they don’t want.

That alone means an agreement is likely to be found, and Corriere do say the ‘will is always worth more than anything’. In other words, both clubs and the player want a permanent move to happen, so it probably will.