Newcastle United have been pulled into the mix for Inter Milan’s Ivan Perisic this summer, should he leave the Italian club.

Perisic is out of contract at Inter at the end of the season, and while the Italian champions are keen to keep him, there has been no extension to his contract as yet.

That leaves him free to discuss a deal with whomever he likes in Europe and, according to Corriere della Sera, Newcastle are one of those who are interested.

They explain that Inter’s owners were left surprised by the player’s recent comments about his future, having previously been ‘confident of reaching an agreement’ over a new deal.

They’re set to meet at the end of the season, but Inter’s chiefs have made it clear that they will not do anything ‘crazy’ to keep the Croatian, nor will they sign up for a race for his signature. 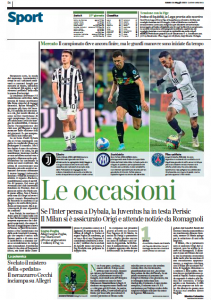 The big problem is that the competition is increasing, with Newcastle, who are ‘rich’ but can’t offer Champions League football, and Juventus recently brought into the mix.

Inter Milan seemingly don’t want to compete with either of those for Perisic’s signature, and this is something they’ve made clear to the player via ‘leaks’ from those higher up the club.

That means the Magpies, with their new wealth, could have an advantage, but that lack of Champions League football is a big stumbling block.