About a week ago, we covered a story in Italy about an interest from an Italian club in Leeds United’s Victor Orta.

The club is AS Roma, who have recently changed owners from James Pallotta to the Friedkin family, who wanted to wait until the end of the transfer window before continuing their restructure of the club.

In the meantime, CEO Guido Fienga took over the responsibilities of a director of football to get deals like that of Chris Smalling over the line, with some success.

However, with everything now over and done with, the Friedkins ‘are now working to continue the restructuring process of the company’.

The first move they want to make is to appoint a director of football, and four names will be looked at.

The previous report, from Gazzetta dello Sport, suggested they already had done, but Corriere believe that is yet to happen. 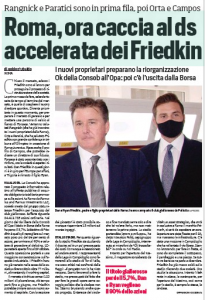 They explain Ralf Rangnick, Leeds’ Victor Orta and Fabio Paratici ‘will be evaluated’, while the profile of Luis Campos at Lille ‘is also liked’.

It will be interesting to see what comes of this, as we doubt either Andrea Radrizzani or Marcelo Bielsa would be pleased with anyone going near Orta, but the decision would be his at the end of the day.

As we mentioned in the previous report, however, the Elland Road based director is close to Monchi, who didn’t have the best of times in Rome when he was in charge of transfers there, which may play a part in his evaluation of the position if it were to land on his desk.