Chelsea are interested in Jules Koundé and reports from the Spanish press continue to insist the Sevilla star has an agreement in place with the west London club.

Marca reported on Tuesday the Blues have ‘not even picked up the phone’ to call the La Liga side about signing the defender.

Julen Lopetegui started the 22-year-old in his side’s 3-0 win over Rayo Vallecano, despite him not featuring in any of the pre-season matches.

According to AS, the centre-back wasn’t involved in the friendly fixtures due to a ‘small injury’ and the interest shown by the Champions League winners.

At the Spanish club, they aren’t clear if the player will be able to leave the club since Thomas Tuchel’s side haven’t come close to their economic demands of €65-70m.

It’s said the Premier League side ‘have not resumed negotiations’ and despite this, Sevilla ‘suspect there will be one last attempt’ from them to sign the France international before the window closes. 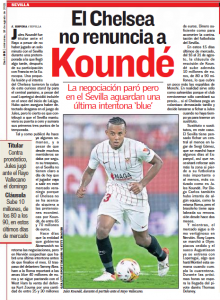 Koundé’s clause has been raised from €80m to €90m for the last two weeks of the window.

AS suggest this will ‘serve as a lifeline’ as Sevilla plan to only change the asking price if Chelsea decide to leave it ‘too late’ to sign the player.