With only four days until a Champions League clash against Liverpool, Porto are going through a rather big dilemma when it comes to the team they’ll be able to line up.

Manager Sérgio Conceição revealed in a press conference yesterday that club captain Pepe, who had a knock in the match against Atletico Madrid, is still unavailable and will not play against Gil Vicente tonight.

The 38-year-old’s absence would alone be a blow for the Dragons, and it actually becomes a bigger problem due to the situation they’re having in defence, as reported by O Jogo.

Chancel Mbemba is also suspended following a red card in the match against the Colchoneros. Meanwhile, Agustin Marchesin is still injured and ruled out of the match as well. 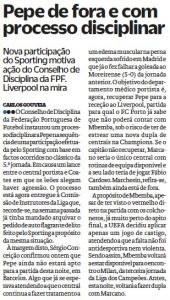 That makes Ivan Marcano the only central defender who’s used to playing for Porto available for this match.

In case Pepe doesn’t come back in time, the Dragons must call up Fábio Cardoso, who hasn’t played a minute for the club yet.

The Portuguese side face Liverpool at the Estádio do Dragão on Tuesday night.

The Reds are set to have Roberto Firmino back in the squad for the match, although they’re still doubtful about the situations of Naby Keita and Thiago Alcântara.