Barcelona are keen on a move for Manchester City’s Raheem Sterling in January, having already tried to sign him in the summer.

That’s according to Sport, who say Sterling sees Barcelona as an ‘ideal destination’ for him to get the game time he’s not getting at the Etihad.

He was previously ‘untouchable’ under Pep Guardiola but has found himself ‘losing prominence’ in the team, so his desire to leave has increased.

Barcelona were keen in the summer, and Mateu Alemany even travelled to Manchester to negotiate the signing, initially offering a swap deal including Antoine Griezmann, Ousmane Dembele or Sergi Roberto or a loan.

A deal was close to being completed but did not come to fruition, but that has not closed the interest as far as Barca are concerned.

They still want to bring him to the club, and Alemany is keeping the Manchester City man on the table ahead of the January transfer window. 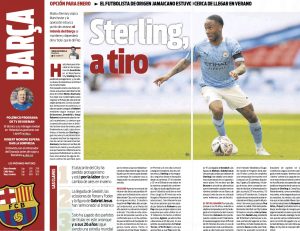 A deal won’t be easy, but Barcelona do have a little more money than they did in the summer, which could smooth things.

Sterling’s situation at Manchester City is also giving them confidence.

He’s only started two of six games this season, and there is a feeling he has fallen down the pecking order, particularly after the £100m arrival of Jack Grealish.

That has led him to think it is time for a change and he is ‘predisposed’ to joining Barcelona, and he has already given his okay to the move.

Several conditions will have to be met for that to happen, and it’s not easy for Barcelona given their financial situation, but the interest is there nonetheless.