Fiorentina are convinced Dusan Vlahovic’s €70m release clause is not a ‘sufficient shield’ to protect them as Manchester City and Tottenham are continually linked with a move.

That’s according to Gazzetta Dello Sport, who say the Italian club are working hard to get the highly-rated youngster signed to a new deal.

Vlahovic is one the hottest prospects in Europe after a highly impressive season with Fiorentina last year.

He’s been linked to the biggest clubs around Europe, and Tottenham were named as an interested party throughout the summer as Harry Kane was linked with a move to Manchester City.

They remain keen, according to reports, with it recently claimed he remained ‘in the sights’ at the club as their interest was backed up.

Manchester City also remain keen, and earlier this month, it was stated they are ‘ready to return’ after failing with a summer bid.

Both club’s hopes were also recently given a boost when Fiorentina chief Rocco Commisso refused to make promises about the player renewing.

Gazzetta follow in that theme today, stating that his contract situation is an ‘issue’ for the Italian club. 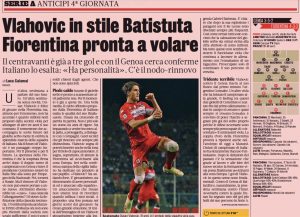 They explain that he is yet to accept the €4m deal that has been offered by the club to extend for another three years.

This has led to ‘torment’ at the club, who are hoping that he will finally put pen to paper on the deal after a doubleheader with Genoa and Inter in Serie A.

Commisso’s plan is to stay in Italy until the international break pushing for a signature, but he will then depart and return at Christmas, although Vlahovic’s renewal cannot wait until the New Year as far as the club are concerned as he’d then be in the final year of his deal.

The biggest issue holding it up is the €70m release clause being requested, which Fiorentina now believe is not a ‘sufficient shield’ to protect them from buyers.

They seemingly want to increase it as much as possible, meaning City and Spurs may want to move quickly to get him before that happens.