With Alexandre Lacazette seemingly staying at Lyon for at least another year, you would think Jean-Michel Aulas would sleep easy at night for the next 10 months or so.

Unfortunately for the club president, he can’t.

When one problem disappears, another pops up, and this time, the problem is named Rachid Ghezzal.

The 24-year-old winger only has one year left on his contract, and, for now, is refusing to renew his deal with the Ligue 1 club.

On Monday morning, we covered an article in L’Equipe about West Ham’s and Everton’s interest in the winger, but with Yannick Bolasie now officially a Toffee, the latter might drop out.

West Ham had seemed the most serious, given the same French newspaper earlier claimed a €8m had been submitted. 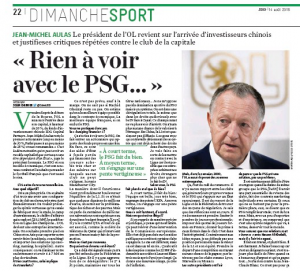 Slaven Bilic’s side remain in the running, and it’s causing Aulas to worry whether or not he might lose his young talent.

Speaking to Le Journal Du Dimanche in France, the club’s president said: “We don’t know if Rachid Ghezzal is staying or going.”

Coming from the man in charge of most aspects of your club, this isn’t a reassuring line, and considering the winger was left out of Lyon’s squad for their 3-0 win over Nancy (Lacazette scored a hat-trick), it’s not looking too good.