Antonio Rüdiger’s future at Chelsea beyond this season remains uncertain as he has a contract expiring in 2022.

On October 5th, Sky Deutschland stated the Blues’ initial offer left the defender disappointed and talks between the two parties were currently on hold.

Having lost prominence in the first half of last season, the 28-year-old became a key player under Thomas Tuchel, who replaced Frank Lampard back in January.

The former Borussia Dortmund manager is an admirer of the centre-back, and wants to convince him to continue at the west London club.

That’s according to AS, who add his situation has caught Real Madrid’s attention. The Germany international will be available on a free transfer next summer, should he decide against renewing his contract with the Champions League winners.

Los Blancos have the capacity to offer the former AS Roma man a lucrative wage, if he joins them as a free agent. It’s claimed they ‘plan to offer’ him a tempting package, which includes an annual salary of €12m. 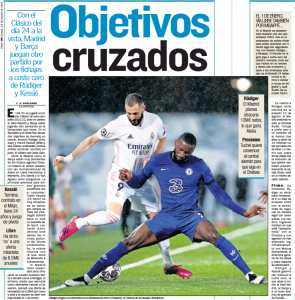 Even though Tuchel’s desire is to retain his compatriot, the report states the player remains firm with the ‘idea of ​​starting 2022 with the possibility of negotiating legally with whoever he wants’.

Real Madrid want that as they would prefer Rüdiger to snub Tuchel and Chelsea, and to join them on a free transfer.