The continuous rumours sending Antonio Conte to Inter to replace Luciano Spalletti grow stronger by the day, which means more and more players are being linked with the Serie A side as the former Chelsea manager will want the right men to play his ideal style of football.

Among those has been Manchester United’s Romelu Lukaku, whom the Italian wanted at Stamford Bridge, and Gazzetta dello Sport believe Inter have the perfect asset to make any deal for the Belgian easier: Ivan Perisic.

The Croatian winger has made it clear he would like to give the Premier League a go before his career comes to an end, and while he isn’t worth the €50m Inter were asking for him a while back, the Italian club still value him at €30m.

With this in mind, Beppe Marotta and co. believe an offer of €30m + Perisic for Lukaku would be a fair exchange, one that would see Manchester United make a ‘profit’ of €10m as it’s said the Red Devils value the Belgium international at €50m. 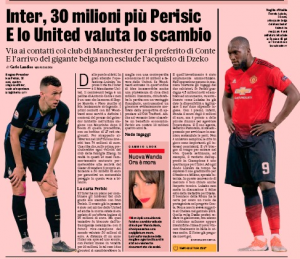 One of the biggest issues Inter faced when trying to sign the striker was his wages, but Gazzetta explain the 26-year-old would be prepared to lower his demands in order to complete the move to San Siro.

No bid has been made yet, however, and until it does, these articles are just attempts to convince a fanbase the idea isn’t as ludicrous as first thought.

There’s no guarantee Ole Gunnar Solskjaer wants Ivan Perisic, especially if he’s trying to sign Daniel James from Swansea, another winger who has a preference for the left-hand side of the pitch.