Real Betis are the ‘most interested’ team in signing Crystal Palace’s Vicente Guaita, according to Super Deporte.

The newspaper focuses on the goalkeeper’s performances for the Eagles, where he conceded 42 goals and kept 10 clean sheets in 35 appearances.

It’s claimed the 33-year-old’s impressive displays saw him end up on the radar of Chelsea and Manchester City in January.

With a year left on his contract at Selhurst Park and no negotiation over an extension, the former Getafe man could return to Spain this summer.

Betis are interested in the keeper and they have ‘activated’ for his signing in the last few hours. Guaita is the top target for the club’s new manager Manuel Pellegrini.

Super Deporte add Guaita’s decision to join Palace in 2018 turned out to be a ‘revolution in his career’. After finding it difficult to adapt to English football, he has now become a ‘true idol’ at Palace. 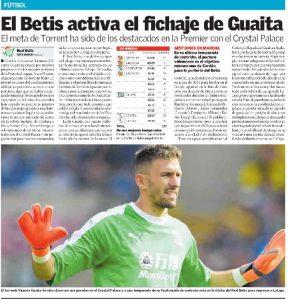 The custodian would be willing to return to La Liga, probably after reaching his best level with the Premier League club.

It’ll be interesting to see if Betis can acquire Guaita’s services for €4m in the coming months. Should Palace decide against letting him leave, they could risk seeing the keeper leave the club as a free agent in 2021.