According to Fanatik, Trabzonspor are leading the race to sign former Liverpool forward Daniel Sturridge, despite the reported interest from Celtic and Rangers.

The 29 year old has been linked with a possible reunion at Ibrox with his former Liverpool teammate Steven Gerrard, whilst Celtic boss Neil Lennon also has an eye on the player.

However, it’s been well documented in the Turkish press that Trabzonspor are in talks to sign Sturridge, who left Liverpool earlier this summer after his contract expired.

Fanatik today claims the six time Turkish champions are still in discussions with Sturridge and are looking to complete a deal for the attacker.

It’s claimed Celtic and Rangers remain keen to sign him but neither Scottish Premiership League club can match the Super Lig side’s offer, which is said to be €2m a season… likely after tax. 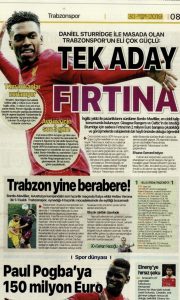 Fanatik specifically reports on Gerrard’s interest in Sturridge but at this stage it seems the Rangers manager could miss out on his target.

Sturridge made 27 appearances for Liverpool in all competitions last season, scoring 4 goals.