Home Europe Club ‘intend to get ahead’ of Newcastle United in transfer battle of...
SHARE

The perception the European football media have of Newcastle United has changed pretty much overnight. Despite their takeover not having yet gone through, the Magpies are taken seriously in transfer races they’d previously have been laughed out of.

Now there’s an assumption that Newcastle will be a major player, and can fight the biggest European clubs for signings.

Of course, some of it is manufactured, and it’s still highly unlikely a top player would choose the club over, say, Barcelona, but the radical, and free, PR boost will help Newcastle attract players generally.

An example of this change in perception comes in Monday’s edition of Sport. The Spanish newspaper insists Atletico Madrid are serious about signing Facundo Pellistri, an 18 year old attacker currently playing for Penarol in Uruguay.

But they say some European ‘giants’ will provide competition, and name them as Manchester City, Newcastle United, Napoli and Real Madrid. 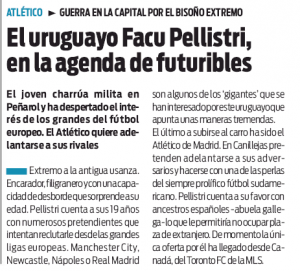 Not so long ago, Newcastle would have been mentioned as an afterthought.

Atletico ‘intend to get ahead’ of the other clubs, so should Steve Bruce’s side be genuinely keen they may need to move quickly. Pellistri has Spanish ancestors, and is in theory entitled to an EU passport, removing the work permit issue.