As well as a centre-back, where they are focusing on Chris Smalling, AS Roma want a new left-back in the current transfer window.

One of the new names to appear on their radar in the past week or so is Sead Kolasinać, a player they have been keeping an eye on throughout his time at Arsenal.

The left-back now has to compete with Kieran Tierney for a first-team role, and with Aleksandr Kolarov seemingly on his way to Inter, Roma are looking to replace the Serbian.

They’ve identified the Bosnia international for that role, and there is hope they can get ‘matters going’ with Arsenal over a transfer, according to Gazzetta dello Sport, such is the good relationship between the two sides. 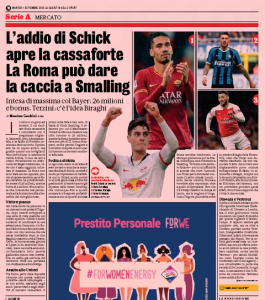 There have been a number of rumours involving the two clubs of late, including one for Amadou Diawara, which all stems from their previous dealings with the loan of Henrikh Mkhitaryan.

The Armenian cancelled his contract with the Gunners to make his move to Roma permanent following a successful temporary spell with Paulo Fonseca, with none of this souring the terms between the two sides.

Kolasinać could be the latest to find himself a landing spot in Italy, and with both Smalling and Mkhitaryan finding newfound form under the Portuguese, there’s a good chance the same could apply for the former Schalke 04 star.