Earlier this year, Barcelona agreed a deal with SC Braga to bring Francisco Trincão to the Camp Nou in July.

Over the past two days, the Catalan media explained the La Liga side have received an offer from an unnamed Premier League club for the 20-year-old.

On Tuesday, The Guardian reported Leicester City have offered around £45m (€50m) to sign the forward.

The Foxes’ idea is to take the Portugal U21 international on a two-year loan deal with an obligation to buy. Atalanta have also joined Brendan Rodgers’ side in chasing Trincão.

Mundo Deportivo have responded to the interest shown by the two clubs, by providing Barcelona’s stance on Trincão.

It’s claimed the Spanish side ‘have no intention of accepting any offer’ for the player who is yet to represent the Blaugrana.

The club’s technical leaders consider Trincão as an ‘important bet’ and they want to see him in a Barca shirt next season. 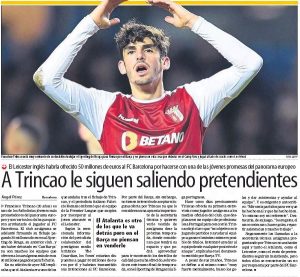 Mundo also stress that even if Atalanta, Leicester or other suitors continue to insist for Trincão’s signing, ‘all of them will find a no for an answer from FC Barcelona’.

It’s clear the European giants have no intention of sanctioning Trincão’s transfer this summer, and Barca’s idea is to include the player in their plans for the future.