Sander Berge’s future seems to be away from Bramall Lane following Sheffield United’s relegation from the Premier League.

The midfielder has drawn attention from Italy and particularly from Napoli, who have identified him as a target for this summer.

That’s according to Gazzetta dello Sport, who say the Serie A side will need a replacement for Fabián Ruiz, if the Spaniard decides to leave Napoli.

Meanwhile, Lazio have joined the Naples club in the chase for Bordeaux’s Toma Basic.

Regardless of whether he arrives or not, the latter would need a new midfielder if Ruiz is sold in the summer window.

This is where Berge would fit in as he has been ‘identified’ as a target for Napoli sporting director Cristiano Giuntoli. 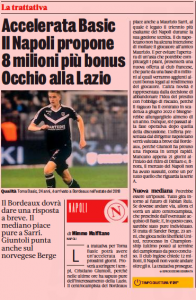 Sheffield United are said to be asking €12m to do business for the Norway international, but Gazzetta state Luciano Spalletti’s side don’t want to meet Sthe Blades’ asking price for Berge, and more so, don’t want to ‘go beyond €8m’.

The €12m had previously been reported as a release fee in Berge’s contract due to the club’s relegation from the Premier League, and it seems a very reasonable price.

‘Negotiation continues’, but ‘everything revolves around the future of Fabián Ruiz’.