If you were keeping track of the deadline day goings-on, you’d be well aware that Victor Wanyama was one of the chief players.

The Tottenham midfielder, who is massively out of favour at the club these days, looked set to secure a move to Amiens before the whole thing collapsed.

We covered a report from L’Equipe late on that Tottenham were to blame, with it claimed they had changed the deal last minute and caused it to collapse.

Well, the newspaper cover what happened today and it does seem that Spurs’ made things difficult for Amiens.

L’Equipe explain that the French club were ‘very close’ to securing Wanyama, having contacted him and Spurs about a move late in the night.

They had an agreement with the Premier League club, and also the Kenyan, who was ready to ‘try his luck’ in France and try to kickstart his career. 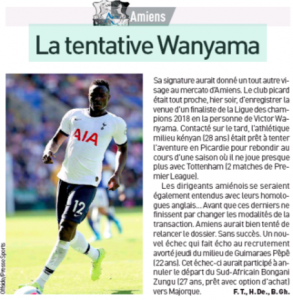 Then, Tottenham ‘changed the terms’ of the deal and caused it all to fall apart. Unperturbed, Amiens tried to ‘revive the case’ only for that to fail instead.

Quite how the deal was changed isn’t mentioned, although it does sound exactly like the sort of thing Daniel Levy would do doesn’t it?