If you needed any evidence of the mess that Manchester United make of transfers these days, then their last-minute hunt for a striker would be a prime choice.

With Marcus Rashford out injured, United ended up scrambling around on deadline day trying to find any striker with a half-decent goal record to fill their ranks.

They ended up getting Odion Ighalo from China, a man it would be safe to assume was not very close to the top of their list when the January transfer window opened.

It was a strange signing from Manchester United, one made in desperation after a month of missing out on other targets.

One of those was Jean-Kévin Augustin, who ended up joining Leeds United in the Championship rather than heading to Old Trafford.

Reports in England suggested Manchester United had made a late move for the striker before his switch to Elland Road and L’Equipe back those up today, explaining what went on behind the scenes.

According to the newspaper, Augustin was ‘a few hours away’ from signing for Leeds when he receives a call from Manchester United.

They were looking for a striker and, having watched the Frenchman on ‘numerous occasions’, decided he could be their man.

They made a ‘concrete contact’, holding a 20-minute exchange with the forward about the prospect of heading to Manchester. 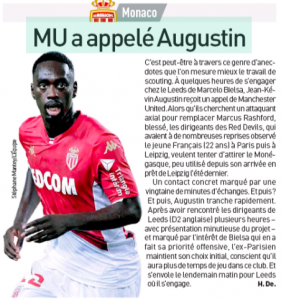 Rather than convincing him though, it seems this last-minute, scattergun approach ultimately worked against them.

Augustin, who had spoken with Leeds for several hours and been given a ‘meticulous presentation of the project’ decided they were his better choice, particularly when it came to getting game time.

The next morning he flew to Leeds, signed the deal there and set Manchester United on the winding, desperate road that led them to Ighalo.