The 26-year-old is loaned by Benfica until the end of the season, and Spurs have the option to sign him permanently for €42m.

Just last week, newspaper Correio da Manhã featured a piece saying the London side have ‘admitted’ they’ll be signing the player on a permanent deal.

However, a report from newspaper A Bola today now says Tottenham haven’t even spoken to the Eagles regarding Carlos Vinícius’ future. 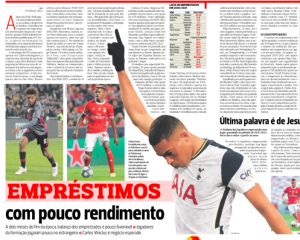 The outlet says there’s been ‘no contacts’ between the clubs yet. They also point out that Carlos Vinícius has ‘gained market’ during his season in London. That’s why Benfica shouldn’t settle for a small price for the player they spent €18m on.

The Brazilian has 10 goals in 21 appearances for Tottenham so far. He’s still to get a sequence of starts under José Mourinho, even though that report from Correio da Manhã said the Premier League side looked at him as an ‘ideal partner’ for Harry Kane.

With still a few months to go until the end of the loan, Spurs could negotiate a fair fee with the Eagles.