For some unknown reason, Friday saw the emergence of a very strange claim on social media involving Paul Pogba, Juventus and a buy-back clause of more than €60m.

We checked, double-checked and even triple-checked the French newspaper, and unless we’re blind, we can’t see anything that even remotely hints that.

The first mention of this so-called clause comes from this Premium Sport HD article, which also mentions claims from Tuttosport that the France international is ‘nostalgic’ about his time at Juventus.

Off to Tuttosport we went, and that is indeed there, but the Italian newspaper also make it very clear #Pogback (to Juventus) isn’t happening.

While the Serie A side are said to be monitoring his progress at Manchester United closely, within the club, there’s a word for the hypothesis of bringing their former star back: “Insanity”.

This is, of course, purely on a financial basis, as, if money wasn’t an issue, they would have him back in a heartbeat since he’s already thrived under Max Allegri, and a large chunk of the team is still there. 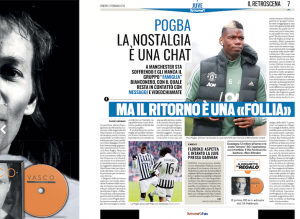 That’s why Pogba would probably ‘voluntarily’ return to Turin, a club where they are careful with the growth of their younger players, consisting of a squad seen as a ‘big family’.

Furthermore, the Frenchman is part of a ‘virtual’ chat group where various members, past and present, of the Juventus side he was in still talk.

As Tuttosport put it, this isn’t that strange, but it shows how important the ‘human’ factor is at the Serie A club, which is an important factor for players when they’re young.

This is why it’s ‘probably’ that Pogba is feeling nostalgic about his time there, especially with all the struggles he’s said to be having with José Mourinho.

Either way, to get back to the original point: Juventus don’t have a €60m+ buy-back clause on the midfielder, and even if they did, they probably wouldn’t trigger it given the wider cost of the deal.

Also, can you really imagine Manchester United agreeing to that? We can’t.