Marseille’s Florian Thauvin has several options to pick from for the summer as his contract expires on June 30th.

The likes of West Ham United and Crystal Palace wanted to bring the former Newcastle United man to the Premier League in the next market.

L’Equipe on Friday mentions the Hammers and reports David Moyes’ side have already made an offer to sign the 28-year-old on a free transfer.

Recent claims from elsewhere have stated Mexican side Tigres want to bolster their squad and have identified the winger as their main target.

These claims are backed in today’s edition of the French newspaper, and it’s explained Tigres vice-president Mauricio Culebro started to ‘flirt’ with Thauvin at the end of March.

Contacts between the two parties have been regular since then, and the Mexican club are ready to offer him a five-year deal [plus signing bonus] that will see Thauvin earn a net salary between €23m and €25m for that period.

L’Equipe explain the attacker spoke to emissaries of Napoli, Atlético Madrid, AC Milan, and a few unnamed French clubs also carried out polls for him. The report then adds he ‘turned down’ the offer from West Ham.

André-Pierre Gignac left Marseille to join Tigres on a free transfer in 2015 and the 35-year-old has informed Thauvin about the merits of joining them. 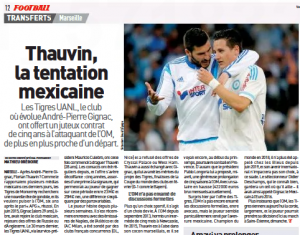 As per the report, Tigres are ‘now holding the rope’ and Thauvin could make a decision on his future before his side’s clash against Saint-Étienne on Sunday.

Having already made an offer, West Ham must step up their efforts to convince Thauvin, if they want to retain any hope of signing him in the upcoming window.