Brighton & Hove Albion’s Marc Cucurella will be the third most expensive Spaniard ever when Chelsea make his signing official, according to ABC.

The Blues and Graham Potter’s side have agreed to a £62m [€74m] deal including bonuses.

If the operation goes through, the left-back will be behind Kepa Arrizabalaga and Álvaro Morata, as the most expensive Spaniards. The latter two were also brought by Chelsea for €80m each.

Cucurella will sign a six-year deal with the west London club. He earns €1.6m per year at Brighton and his wages will increase by a factor of four at Stamford Bridge.

Last summer, the 24-year-old favoured a move to Brighton for their sporting project. The player also had a verbal agreement with the Seagulls, to facilitate his departure, if one of the big Premier League sides knocked on his door.

That’s exactly what Manchester City did in May and they agreed a deal with his agents, Aleix Piqué and Álvaro Domínguez. Pep Guardiola also held talks with the player to explain his plans.

City offered €50m to their Premier League counterpart, but Brighton’s ‘greed has known no limit’. Potter’s side blocked the fullback from his dream move to the Etihad.

Last Saturday, Aleix Piqué received a call from Chelsea owner Todd Boehly, stating that he wanted to sign defender and will ‘start by offering €60m’. Cucurella and his agents made a trip to Boehly’s private villa in Mykonos, to negotiate the terms of the contract.

The representatives informed City that Thomas Tuchel’s side had considerably improved their offer, but Txiki Begiristain stood firm and refused to offer more than the €50m fee proposed to Brighton.

ABC state the Seagulls didn’t accept Chelsea’s €60m offer, which saw them raise it to €65m including bonuses. Brighton chief Tony Bloom gave the approval to this proposal yesterday, before he broke the agreement and demanded more money. 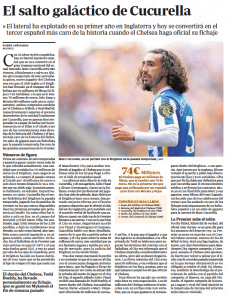 Bloom wanted €66m plus €8m variables, a figure that has been definitive so that the ex-Getafe man passes his medical and can sign a contract with Chelsea. There is now a happy ending for Cucurella and his agents.

Boehly has ‘personally handled’ the Spaniard’s signing for the Blues, which was arranged in his private villa in Mykonos last weekend.

ABC state he will be a new Chelsea player on Friday, barring last minute surprises or a twist in this case.