Last night, The Mirror published an article saying Everton were getting close to signing Yacine Brahimi from Porto.

They claimed that the Toffees had their first €30m bid rejected, and as the Portuguese club are demanding €40m, Everton would be confident “a compromise can be brokered”. 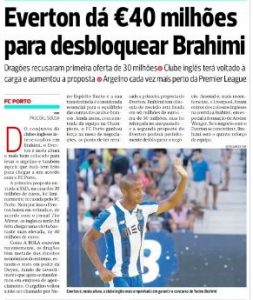 So what have A Bola put on a headline today? “Everton give €40m to unblock Brahimi”.

According to the own article, the claims are coming from the Mirror’s story. But they say that the €40m bid was already made, which the English newspaper never did.

A Bola says that €40m should be enough for a deal to happen, as Porto have only 50% of the player’s economic rights and are happy to get €20m from the transfer.

The Portuguese newspaper mentions that Liverpool and Arsenal have been interested in the player lately, especially Arsene Wenger’s side. But it seems Everton are alone in the race now.