Chelsea are one of four Premier League sides interested in Lucas Vázquez.

That’s what Sport are reporting about the 29-year-old, whose contract at Real Madrid expires at the end of this season.

Zinedine Zidane wants Los Blancos to retain the player and the La Liga side have offered him a three-year contract, with a ‘reduction of 10 percent’ on the €3.5m net salary he earns annually.

The Spain international believes he deserves more and therefore, barring any last-minute surprises, he will not renew his contract.

It’s claimed the Blues are ‘willing to improve’ his current salary and also offer a signing on bonus since he will be available on a free transfer in the summer.

Clubs in Spain and Italy are also interested in Vázquez, but they would not be able to offer better economic conditions than the London club. 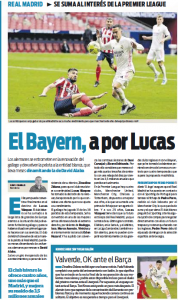 Chelsea, however, are set to face tough competition from Bayern Munich as they are ready to offer him a four-year contract and also improve his salary.

According to the report, the Bavarian club ‘may finally become’ Vázquez’s next destination.

Vázquez’s ‘future is far from’ Real Madrid and with Bayern leading the race, Chelsea will need to step up their efforts, if they want to sign the Spaniard in the next market.