With both Fikayo Tomori and Olivier Giroud seemingly on their way from Chelsea to Milan in the coming weeks, it wouldn’t be fair if Inter didn’t also get in on the action at the Stamford Bridge summer sale.

The man in question, as you might have guessed, is Emerson Palmieri, who has found life tough in London over the past two seasons under both Frank Lampard and Thomas Tuchel.

Thankfully for him, it appears Simone Inzaghi is prepared to grant him a new lease of life at the San Siro next season, with Gazzetta dello Sport claiming the Italy international has ‘overtaken’ the competition and is now the ‘number one objective’ to take over from Ivan Perisic down the left.

He could therefore be the first signing of the new era at Inter, but there is a need to be wary of Napoli’s interest in the player, which have been widely reported over the past few months.

Gazzetta, in their section designated to the Naples club, point out that Luciano Spalletti has already given his OK to the transfer, and ‘all that remains is to find the best solution to conclude the operation’. 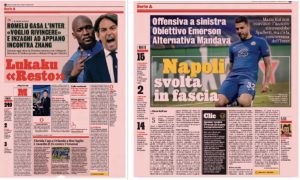 Napoli are ‘ready to negotiate, but are not willing to spend unlikely figures’, and the deal ‘could be concluded for €5-6m’.

At that price, it’s understandable why clubs are fighting over him, especially since he’s a fully fledged Italy international likely to play in the upcoming Euros, but we all know Marina Granovskaia likes to play hardball, even with players she knows the club no longer needs.