Chelsea have already lost Antonio Rüdiger, and Andreas Christensen is expected to follow the German in leaving the Premier League side as a free agent.

This has seen the Blues look for a new centre-back and Sevilla’s Jules Koundé has been pushed forward as the main target.

Apart from the Frenchman, Chelsea have also been credited with interest in Matthijs de Ligt. Juventus have been trying to extend his contract and and the defender himself has spoken about that.

“Negotiations are ongoing at the moment and when the time comes, I will decide whether to extend or look elsewhere. I always look at what is best for me in terms of the sporting project,” the 22-year-old said.

“Two consecutive fourth-place finishes are not enough. We have to make progress in that direction because these are disappointing results. Juventus are a club that always wants to be, and must become, champions.”

Corriere Torino state the ex-Ajax man not only wants sporting guarantees but also wants his buyout clause lowered from €120m to €70-80m, to sign a new deal. At the same time, Chelsea are in the background, ‘forcing’ to secure his services.

Thomas Tuchel’s side looking at the player is discussed in also today’s edition of Corriere dello Sport. They explain the Blues, ‘above all’, are ‘forcing’ to sign the Dutchman. The newspaper interpret his comments as the player wanting to be the ‘master of his own destiny’.

Over at Gazzetta dello Sport, they explain Massimiliano Allegri’s side must have a plan in place if they end up selling De Ligt this summer. 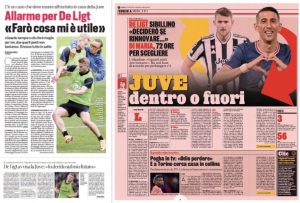 His current release clause is set at €120m and the newspaper takes a look at the clubs who could pay that fee this summer.

It’s claimed the ‘most logical destination’ for De Ligt would be Chelsea, who will need a new centre-back after parting ways with Rüdiger and Christensen.