There’s no denying Thomas Tuchel has worked wonders at Chelsea ever since he took over from Frank Lampard.

Guiding the Blues to a Champions League final, the German manager has surpassed most expectations, and there’s a good chance Roman Abramovich will be more than happy to back him in the summer.

One of the main needs for Chelsea remains a new centre-back, especially if Fikayo Tomori ends up staying at Milan after a successful loan with the Serie A side.

Many names have been mentioned, and yet one who will be readily available in the summer has never really been linked with a move to Stamford Bridge, until now.

Corriere dello Sport put an end to that on Friday, looking at what the future might hold for Nikola Milenković. 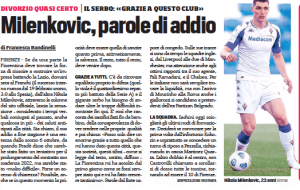 It’s made clear that both Manchester sides as well as Liverpool have been trailing the Serbian for quite some time, but the newspaper also tell their readers to ‘watch out for the great relationship between his agent, Fali Ramadani, and Chelsea’.

There’s no mention of a price, but previous reports did suggest somewhere around the €30-35m mark would do the trick for a 23-year-old whose contract with Fiorentina ends in 2022.