It started in England, and it’s made it all the way to Italy: Everton are allegedly interested in Kalidou Koulibaly.

It’s an idea that has done the rounds before, since Carlo Ancelotti managed the Senegalese defender during his time at Napoli, but the circumstances that made such a move incredibly difficult for the Toffees to pull off have now changed in their favour.

We say that, but it would still be a very expensive deal for Everton, as Gazzetta dello Sport believe Koulibaly is now worth around €50m.

That’s a stark decline from the €80m Aurelio De Laurentiis was asking for last summer, but with the Covid-19 pandemic stretching finances more so than ever, demands need to be more realistic.

Looking at the situation, only Everton are named, at least for the time being, with Gazzetta state ‘Carlo Ancelotti is interested’ in the centre-back, and would ‘willingly bring him to Everton’. 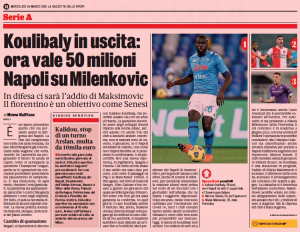 That’s about it details wise with the newspaper then explaining players such as Nikola Milenković or Marcos Senesi would be likely candidates to replace the 29-year-old should he depart in the summer.

We’ll see where this goes, but we know many managers who would ‘willingly bring’ Koulibaly to their clubs if they could.

That doesn’t mean they will.