There’s a good chance the words are being hyped to present it as more dramatic than it probably was, but the Barcelona manager’s comments still seem a little harsh towards Manchester City.

With Barca winning the race to sign Frenkie de Jong, Valverde denied having spoken to the Ajax player before the transfer was agreed.

The Nou Camp boss explained he was ‘surprised’ if Guardiola had conducted a transfer chat, and is quoted as saying: “That cannot be done, you cannot talk to a player with a contract. It’s not in my code.”

De Jong himself had confirmed speaking to the Manchester City boss and PSG’s Thomas Tuchel.

Speaking to Voetbal International, the Dutchman explained: “I have been to Manchester City and PSG and have also spoken with Thomas Tuchel and Pep Guardiola. Both clubs have really made a good impression on me.”

Valverde may be speaking without the full knowledge of facts in this case. It’s seemed throughout that Ajax had no problem with De Jong making efforts to decide which club he wanted to join, so him speaking with Guardiola would make sense along those lines. 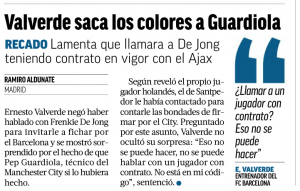 In addition, whilst Valverde may not have had a chat himself that could be more down to his lack of importance at his own club.

The Catalan media made it very clear last week that Barca president Josep Maria Bartomeu and a delegation had travelled to Amsterdam to change De Jong’s mind over a move to PSG.

Whilst Manchester City will have always seen Guardiola as a good weapon to use, Barcelona probably didn’t think the same of Valverde.