Neymar’s possible return to Barcelona has been discussed in the Catalan press over the past few days.

The forward’s current deal with Paris Saint-Germain lasts until 2022 and recent reports suggested he is considering not signing an extension.

Apart from the 29-year-old, Liverpool’s Georginio Wijnaldum and Lyon’s Memphis Depay have been linked with a move to the Camp Nou for most of this season.

The Dutch duo have contracts expiring after this campaign and will be available on a free transfer in the summer.

A ‘Top Secret’ report from Mundo Deportivo explains the Barcelona dressing room has subgroups, but there’s ‘unanimity’ when it comes to the potential signing of Neymar.

It’s claimed Ronald Koeman’s men are ‘still waiting’ and ‘dreaming’ of the Brazil international’s return to the club, and they would prefer the club sign him over the Reds midfielder and Depay.

The attacker impressed in PSG’s 3-2 Champions League win over Bayern Munich and the current Barcelona squad are ‘clear’ the former Santos star’s arrival can help them achieve their goal of winning Europe’s elite club competition again.

Mundo also explain the ‘option of signing Neymar may be real’ and for the same reason, his renewal talks with PSG have stopped.

The Spanish giants will probe the ground with the Paris club for the possibility of signing Neymar. The duration left in his current deal means PSG have only the summer window to capitalise on his sale, if he decides against signing an extension.

According to the report, the Ligue 1 side are interested in Ousmane Dembélé and the World Cup winner could be included to conduct a swap operation for the South American.

Antoine Griezmann can also be considered by Mauricio Pochettino’s side, but Mundo warns the Frenchman doesn’t want to be used as a bargaining chip and isn’t keen on joining PSG. 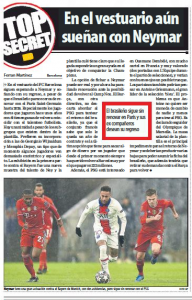 For now, the Barcelona dressing room has unanimously conveyed their message to the club’s new board. Whether or not a deal can be done isn’t clear at this stage, but that’s not stopped Koeman’s men of ‘dreaming’ of Neymar’s return to the Camp Nou.