Boca Juniors and Alexis Mac Allister are both in great form. Currently on top of the Argentine league table and in the Copa Libertadores semifinals, the Buenos Aires side have been showing some great strength, with some help from the midfielder.

Mac Allister has joined the club on a loan deal from Brighton & Hove Albion this summer, and his impact has been quicker than expected.

The Seagulls signed him from Argentinos Juniors back in January, and had to keep him him in his home country due to the lack of a work permit for the Premier League.

Now with his success with Boca, Brighton fans probably wonder how Mac Allister plays. And in an interview with newspaper Olé today, he’s spoken a little of his best abilities.

“Where I feel most comfortable is behind the 9 or in midfield. Always in touch with the ball because it’s my main virtue. I am here to help the team. If I have to run to the sides, I will do it. I will always do everything that is best for Boca,” he said. 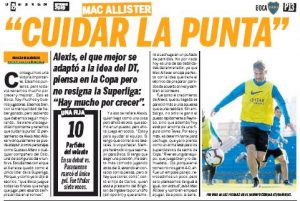 Strangely, the move to Brighton is rarely mentioned. Olé only writes that Boca Juniors have paid for the loan and have no buying option over him.

Last week, it was claimed that all the Argentine side will have is the right to match possible offers for the player. But his stay at Boca after the spell is considered to be very difficult.

Mac Allister is supposed to move to Brighton in the summer of 2020.