During the last week, several Italian reports linked Ezequiel Schelotto with a move from Sporting to English football.

Brighton & Hove Albion, Middlesbrough, and Sunderland were all linked with the 28 year old right back.

That was great news for Sporting, who are looking to sell Schelotto before the end of the transfer window.

English clubs, no matter the division, are seen as sources of good transfer fees in Portugal, and selling Schelotto to Brighton, Middlesbrough or Sunderland is something Sporting would like to do.

Brighton interest, if not that of Middlesbrough and Sunderland, was backed up by 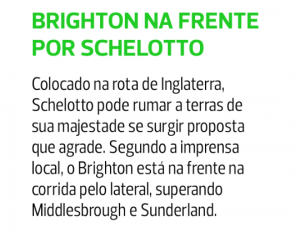 Portuguese sources, and that theme is continued on Sunday.

Portuguese newspaper A Bola believe Brighton are now in the lead to sign the fullback, although the Italian remains linked to Middlesbrough and Sunderland as well.

Sporting would prefer a permanent deal over a loan option, and there’s also said to be interest coming from Turkish clubs. The Portuguese club hope a deal can be done before the close of the window.