On August 2nd, we carried a report from Super Deporte, who claimed Levante have rejected AFC Bournemouth’s €30m offer, which has no bonuses and no percentage of a future transfer fee, for Jefferson Lerma.

A day later, El Desmarque reported the Colombian international’s move to the Vitality Stadium was back on because FC Zürich’s Raphael Dwamena was close to joining the Spanish club, which would then allow the 23-year-old to make a switch to the Premier League.

Today’s edition of Spanish newspaper AS claims Lerma started to say goodbye to his current teammates after a friendly on Saturday and he’s expected to join the Cherries quickl.

The report claims, unless there are any last minute changes, Bournemouth will make his signing official in the ‘next few hours’. It will cost them €30m and Levante will invest the funds they wlill receive from their player’s sale in signing Dwamena and Moses Simon. 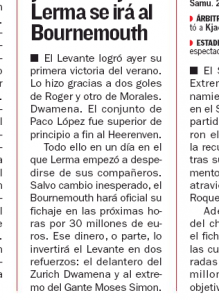 After seeing multiple bids turned down by the La Liga outfit, the English club will finally be able to secure Lerma’s services.

Marca back the claims up, saying in their Sunday edition that Lerma is about to depart for England.