Tottenham saw an approach for Real Madrid’s Marco Asensio rejected this summer, with the player determined to prove himself at the Bernabeu.

That’s according to Marca, who say the player made it clear he would be staying in Spain and fighting for his place under Carlo Ancelotti.

They report that both Tottenham and AC Milan had been ‘looking to strengthen’ in the summer transfer market and had their eyes on Madrid to do so.

Their ‘big target’ was Asensio, and an approach was made, but he rejected them outright, preferring to stay in the Spanish capital and try to get his career there back on track.

He knows his performances over the last two years have been less than satisfactory and wants to get back to his best at the club.

That’s likely to be difficult given the wealth of attacking talent available to Ancelotti, but there is already a plan in place to turn Asensio into more of a midfielder, an area of the team where the Italian coach believes he is lacking.

Ancelotti is confident he can develop Asensio into something else and give him the minutes he wants moving forwards. 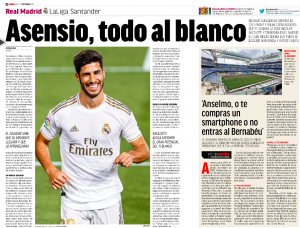 That is why he elected to turn down the proposals that came his way, although there is also an understanding that was a gamble.

Indeed, turning down Tottenham was the biggest risk as they were said to be keen to make him one of their ‘main offensive references’ in the team. In other words, he’d have been a key player under Nuno Espirito Santo.

That, though, wasn’t enough to tempt him, and he’ll instead be staying at Madrid and fighting to make himself that player under Ancelotti instead.