According to Catalunya Radio, via Mundo Deportivo, the Blaugrana representatives held talks with the player’s sister and agent, Maud Griezmann during a meeting to address details of the former Real Sociedad star’s potential transfer to the Camp Nou.

Two key points to come out of the meeting. The first one was Barcelona meeting Griezmann’s release clause of €100m, out of which €20m would go to his former club. The second one is that the France international will be offered a five-year contract.

Ernesto Valverde helped his side win La Liga and the Copa del Rey in his debut season at Barcelona. Having been knocked out of the Champions League by AS Roma in the quarter-final, they are not challenging for any more silverware this season

The Catalan club are already preparing a plan for the 2018/19 season. Their primary target is to secure Griezmann’s signature to bolster Barcelona’s attack for the next campaign, something which was reported by Mundo Deportivo on Wednesday.

Girezmann and his camp are unwilling to discuss any details regarding the negotiations with the Spanish champions as his focus is on helping his current employers finish the season in second spot. 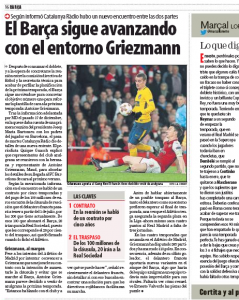 Atletico are keen on keeping their star player at the Wanda Metropolitano beyond this season. They are even planning to offer him a new improved deal, which would also see his release clause increase substantially.

Should he sign, then his move to Barcelona could be prevented. However, Griezmann is not willing to sign an extension as he is determined to play for the La Liga winners next season, according to the Catalan claims.