Dani Olmo left Barcelona for Dinamo Zagreb in 2014 and his performances last season caught the attention of several clubs.

Mundo Deportivo’s Miguel Rico states Dinamo received proposals worth more than €30m in the last window, but didn’t accept because they were of the belief the 21-year-old’s price tag would rise further.

With six goals and six assists in all competitions this season, there are many clubs after him and Rico states the La Liga winners are one among them. Barcelona have been following the Spain international for a while and have considered re-signing him on more than one occasion.

However, the Catalan club have a problem because they may not be in a position to pay a hefty transfer fee as their priority is to strengthen other areas.

Despite that, Rico explains Barcelona have control over the situation with regards to Olmo.

They share a good relationship with his father, Miquel Olmo, and the technical leaders are in contact with his agent Juanma López once every eight to 10 days. 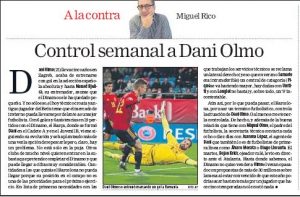 Bojan Krkic’s father works as a scout for Barcelona and he watched Olmo in action against Atalanta earlier this week.

Speaking to Mundo earlier this month, Olmo didn’t close the door on a return to return to Barcelona, meaning there is a possibility for the club to sign their former player.