In the French language, there’s a term for an issue that keeps rearing its ugly head whether you like it or not.

It’s called a ‘serpent de mer’, with the literal translation being ‘sea serpent’, and that, ladies and gentlemen, is what Kylian Mbappé’s contract situation has become for Paris Saint-Germain.

With a deal expiring in 2022, the Frenchman has started to be linked with other clubs, such as Liverpool, and him dawdling over the decision isn’t helping anyone.

L’Equipe have an article on the matter, kicking off with ‘it’s become a sea serpent that regularly crops up during press conferences’, doing so again last Friday when Mauricio Pochettino was asked about it.

The French newspaper explain the ‘big manoeuvres’ were kicked off over a year and a half ago, and the last few weeks haven’t really produced anything substantial.

That’s why those in charge at the club want to know now, 16 months before the end of his deal, so they can plan accordingly.

If he says no, then a big sale will be organised, with a recent report from Le Parisien explaining they would ask for somewhere around €200m; a fee Liverpool would reportedly be able to pay. 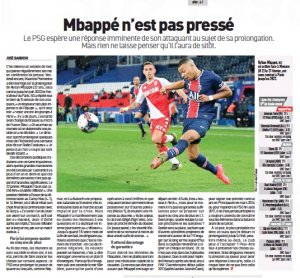 While Mbappé is happy in Paris, it’s stated he wants ‘more assurances’, such as what kind of players the club will target or where he’ll fit into their plans when ‘other clubs are looking to build around him’.

The likeliest option as of now is said to be a waiting game until the end of the season and maybe even beyond, which will suit interested clubs such as Liverpool just fine, but doesn’t play in the favour of Paris Saint-Germain.

For Jürgen Klopp, who will likely still be at Anfield regardless of how poor this campaign ends up being for the Reds and has been in contact with the player, allegedly, the longer Mbappé waits, the cheaper he gets.