Barcelona have taken a shine to Anthony Martial, according to Mundo Deportivo. The Catalan newspaper’s Sunday edition has Martial in pride of place on the front page, and then in a following two page spread.

Martial is said to be an ‘ambitious goal’ for Barcelona and fits the rough profile the club are looking for. The 21 year ‘has enough quality to play at the highest level’ explain Mundo Deportivo, and that includes Barcelona.

A reason for some optimism over a potential transfer, indeed for any hope at all, is that Jose Mourinho hasn’t counted on Martial as much as some expect, especially given the Frenchman’s form this season.

Should Martial continue to be denied a regular starting place by Mourinho, then Barcelona would try to take advantage of the ‘situation’ and any desire Martial has to move elsewhere.

Barcelona are said to be ‘very attentive’ to Martial’s Manchester United progression, and would be preparing the ground in case there’s chance of a deal. 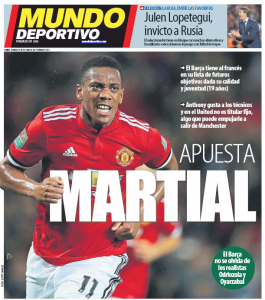 Despite the big fanfare, and how much space Mundo Deportivo give the claims, there’s nothing concrete. No claims of an impending offer, or even talks with the player’s entourage.

This just seems to be at the idea and initial planning stage and could just as easily be screwed up and thrown towards the bin as provide a basis for work over upcoming transfer windows.

Anthony Martial has a Manchester United contract until June 2019, with the club having an option for a further year.

At this stage, this doesn’t feel like a story being pushed by Martial’s camp.