Barcelona’s big priority in the summer transfer window is signing a forward, having allowed Luis Suarez to join Atletico Madrid in the last end of season market.

That’s what the Catalan media have been covering most in recent months, with big names like Erling Haaland being wheeled out for dramatic stories.

Potential striker signings tend to get more coverage, with the idea being it’s more exciting and is what fans most want to know about.

However, Thursday’s edition of Mundo Deportivo focuses on Barcelona signing a left-footed central defender. Pretty much all hope has been lost with Samuel Umtiti, with the Camp Nou side tired of his prolonged lack of physical peak.

Eric Garcia is expected to arrive from Manchester City as a free agent, in a transfer which has become far more dramatic than it ever needed to be.

Once that’s sorted the plan is another man, even though there’s ‘little money’ for the task.

There are ‘various names on the table’, with AC Milan’s Alessio Romagnoli the first named. His contract expires in June 2022, although it’s stated any claimed Barcelona interest is likely down to the player’s agent, Mino Raiola, engaging in market games. 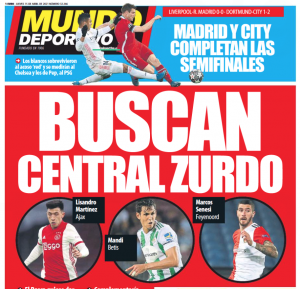 Next up is Ajax’s Lisandro Martinez, then Marcos Senesi at Feyenoord and finally Aissa Mandi. The latter’s contract with Real Betis expires in June, and even though he’s right-footed it’s suggested an exception could be made given he can play on the left side.

The option of taking Jorge Cuenca back from Almeria isn’t given any strength.