Aston Villa forward Anwar El Ghazi has revealed he has returned from COVID-19 lockdown fitter than he was before it.

That has meant he has been forced to train from home and attempt to maintain his fitness without the usual luxuries on offer at his club.

It’s a task that’s proven tricky for some, with numerous players, including those in other leagues around Europe, reporting back rusty and out of shape.

Not El Ghazi, though, who has somehow managed to improve during his workouts in isolation at home.

“I got fitter than I was during the lockdown,” he told De Telegraaf.

“Without losing muscle mass. My fat percentage was between ten and eleven per cent, now between eight and nine.

“I trained like an animal for myself and was able to watch my food even better than usual during the season.

“Then you eat a lot of carbohydrates, and your body asks for fast sugars. I skipped that one now. And Ramadan and the lockdown also coincided, speeding up the weight loss.”

El Ghazi is set to return to Premier League action this evening, with Aston Villa vs Sheffield United the first game of the new, revised scheduled.

Villa return attempting to avoid relegation to the Championship at the first time of asking after a challenging first year back in the Premier League.

They currently sit 19th in the table but only two points from safety, with the league tight up to 15th, something El Ghazi is choosing to focus on.

“Villa’s a really big club, and we just have to make sure we stay in the Premier League. We are also better than being relegated. We’re still two points below the relegation line, but a victory over Sheffield could take us from nineteenth to sixteenth.

“The least the club and the fans can expect is that we give everything for Villa.

“We have to because with Liverpool and home games against Manchester United, Arsenal and Chelsea we still have a lot of opponents to choose from in the last nine duels.”

As with Aston Villa, El Ghazi’s first year of Premier League football has been far from plain sailing.

The 25-year-old has been a regular under Dean Smith this year, making 31 appearances in all competitions, scoring six goals and registering seven assists. 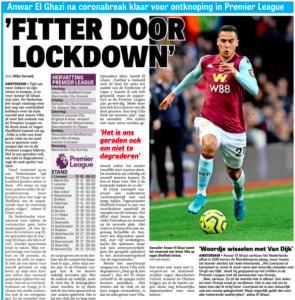 He’s managed four goals and four assists in 25 games, a decent return by any means, but a tally he thinks is only worth a six out of ten rating.

“I can be reasonably satisfied with my first year in the Premier League so far,” he added.

“With the emphasis on being reasonable, because I think I should become more important.

“In 25 duels, I have scored four times and delivered four assists. That’s not bad at a club that low. I’ll give myself a six.”