Home Europe “He asked the driver to slow down” – Agüero’s father speaks out...
SHARE

As officialy confirmed by Manchester City this morning, Argentine forward Sergio Aguero is heading back to England after suffering a car accident in Holland last night.

The club did not say what the player’s injuries are, although reports from England and Argentina say he has a fractured rib.

Aguero’s father Leonel Del Castillo has spoken to Argentine TV channel TyC this Friday morning, and confirmed the Manchester City star was given green light to leave the hospital in Holland.

“He has been discharged and will be transferred to Manchester”, Aguero’s father told TyC.

Castillo also backed up other news that came from Argentina, which said that the taxi was going to fast and Aguero asked the driver to slow down.

“According to Sergio, the taxi was going very fast, he asked him to slow down and even put on his seatbelt belt. At his request to slow down, the driver just said ‘ok’. Then he left the lane, or something, and hit a lamppost. He got lucky because he was going too fast”. 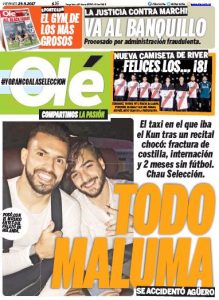 Besides Manchester City, the Argentine national team is also concerned with the situation. They need good results in the next international break to do better in the World Cup qualifiers, because as things stand, all they have is a spot in the playoffs.

Local newspaper Olé has the accident in their front page today, and claim that besides a ‘disgrace with luck’ for Aguero, they recall that manager Jorge Sampaoli now has a ‘headache’.